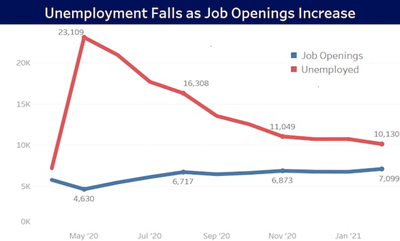 Big picture: Openings are above their level in February 2020, prior to the pandemic, when they were 7 million. They fell to 4.6 million in April and have been rising since.

At the same time that job openings have been rising, the number of unemployed workers has steadily decreased. Unemployment peaked in April 2020 at over 23 million workers but has fallen to just under 10 million in February.

In April 2020, when unemployment was at its peak and openings were at their nadir, there were 18.5 million more unemployed workers than there were openings. As of February, that gap had shrunk to 2.6 million – a remarkable improvement in less than a year.

The gap is probably smaller now. The March jobs report showed unemployment fell further and there are other indications that the labor market is improving.

Looking ahead: It might not be too much longer before the number of job openings exceeds the number of unemployed workers. As of February, there were 1.35 workers unemployed for every opening. Even if that ratio falls below 1, that won’t mean all workers will be able to find jobs.

Be smart: There remains a skills mismatch in the economy that existed before the pandemic. The skills available workers have do not necessarily match the jobs employers have open. With so many service sector workers losing their jobs, but many openings (even prior to the pandemic) concentrated in business services and healthcare and social assistance, the mismatch poses an obstacle to recovery.

Congress will need to devote resources to retraining if it is to help alleviate this matching problem.