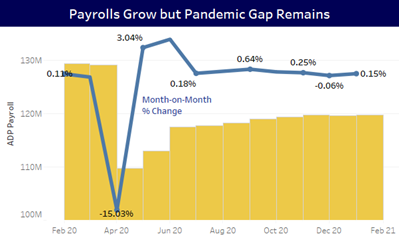 More data: The Institute for Supply Management (ISM) releases monthly surveys of the sentiment of manufacturers and service providers. In January, services ticked up and are now higher than pre-pandemic. This is surprising because services have taken the brunt of the economic pain during the pandemic. Manufacturing sentiment fell slightly but remains well above its pre-pandemic level and strongly in growth territory. 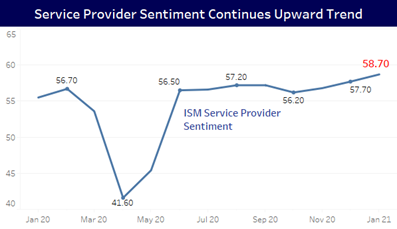 On the jobs front, both surveys found businesses adding jobs at a strong pace. Services showed a sharp increase.

Bottom line: The virus has taken a toll on the economy the last few months. The extent of that toll is now showing up in the data, and it may not be as severe as originally feared. Hopefully the economy added jobs in January and has started on a path of adding jobs uninterrupted for months and years to come.